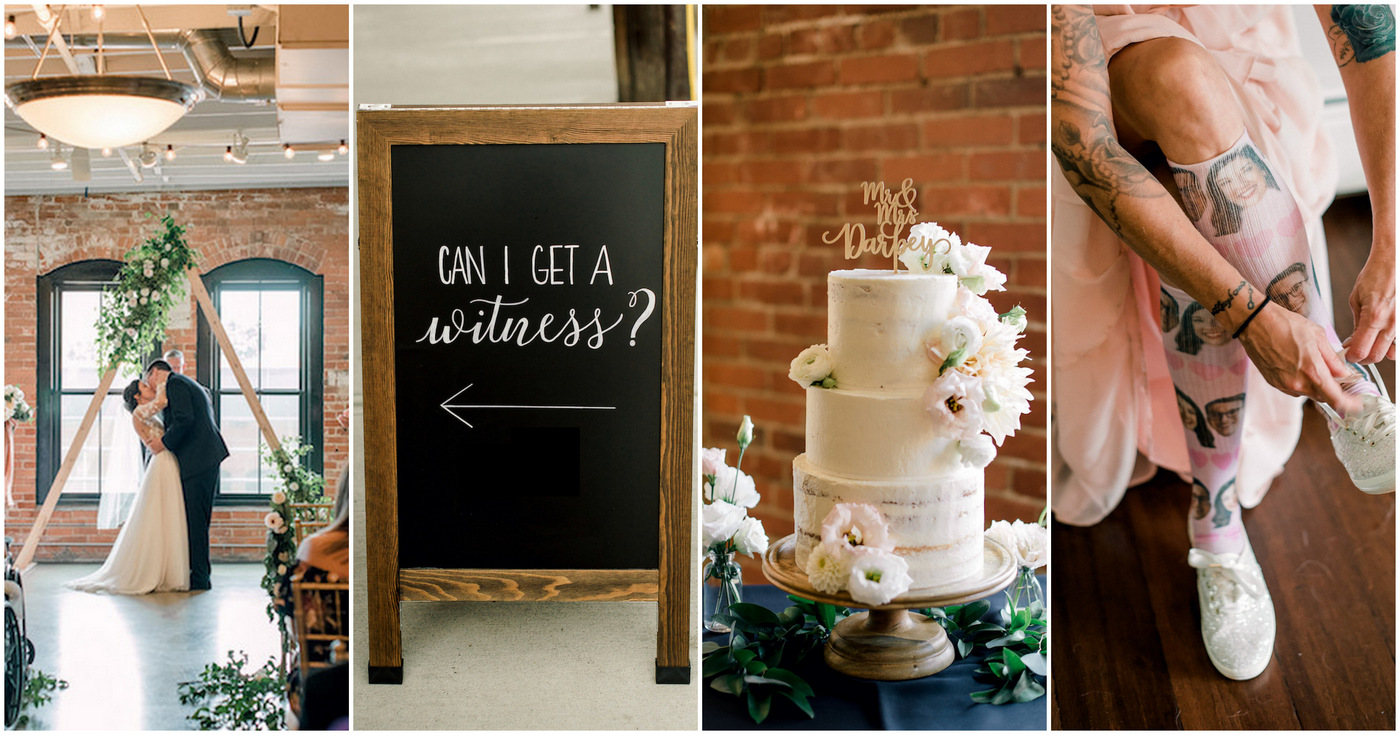 Today’s romantic mid-century modern wedding in neutrals is set in Cleveland, against the beautiful industrial architectural backdrop of the Great Lakes Brewing Company. Groom Richard, a web developer, and bride Randi, an English second language teacher focused on clean lines, simplicity, a connection to the outdoors – and an awesome sense of humor!

Their celebration was filled with cool details, including hilarious bridal party socks with the couples faces on them, worn with groomsmen in Converse for the guys, and bridesmaids in Keds. Brilliant! 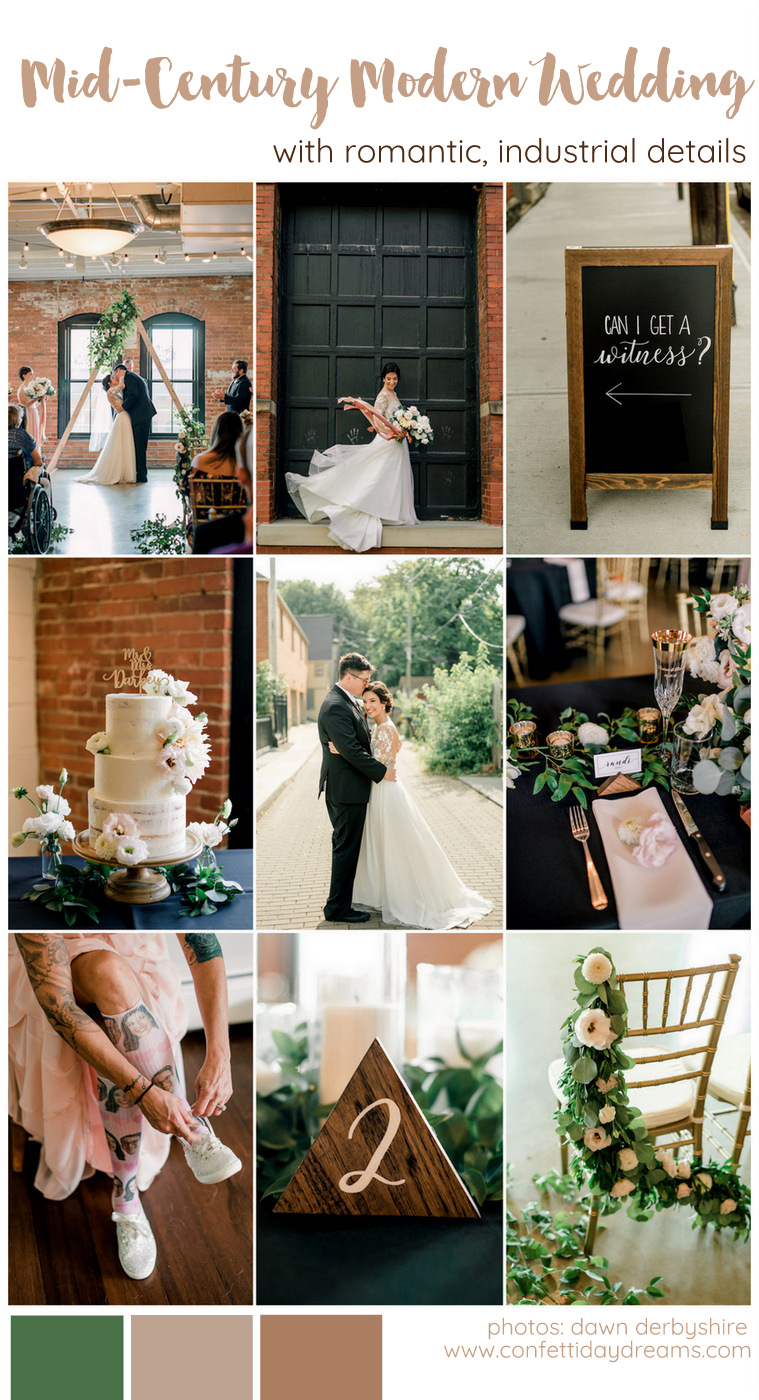 The couple, who are huge fans of The Office, included a few fun references from the show into their vows and speeches. “We’ve watched it all the way through more times than we can count, so we knew we wanted to pay homage to that during our wedding,” explains Randi.

Their biggest nod to The Office certainly had to be their bridal party entrance into the reception. “We recreated Jim and Pam’s wedding entrance. Our bridal party fully embraced their parts and they exceeded our expectations! From throwing papers to the epic Dwight Schrute kick, it really set the tone for the reception!”

Love Story: Richard and I met in 2008 through a mutual friend when he was 19 and I was 17. We both worked at the same place, but at different times so we never ran into one another. Luckily, our friend (one of my bridesmaids!) introduced us.

Fast forward to 2016, we took a trip to Niagara Falls, Canada- our first vacation by ourselves! The first night we got there, we checked into the hotel and then made plans to grab some dinner and go check out the Niagara SkyWheel because I was the most excited to do that. On the way there, after dinner and drinks, I clumsily stubbed my toe in a pothole. Ricky bent down to make sure it was okay. Once he had confirmed that my toe was still intact, he pulled out the ring and asked me to marry him! He had planned to do it on the SkyWheel, but I think that his nerves got the best of him. It couldn’t have been more perfect; the proposal was definitely us! 🙂 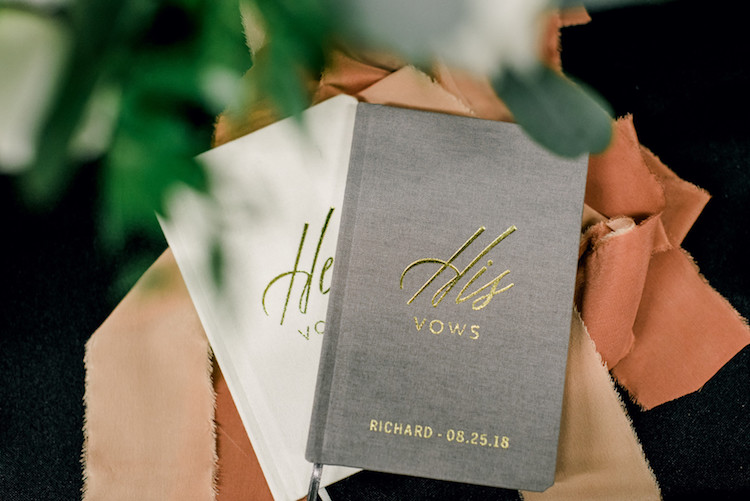 Bridal Party Socks + Comfy Shoes: We really wanted everyone to be comfortable all day so we got Converse for the guys and Keds for the ladies – flower girls and ring bearer included! My sister-in-law really knocked it out of the park though by getting the entire bridal party socks with our faces on them. I couldn’t stop laughing when I saw them- the ladies rocked pink socks while the guys had gray socks. They were too fun!

For my wedding bouquet I knew that I wanted an oversized bouquet of greenery, white and blush tones. Heather, the talent behind Fair Rarity Flowers, exceeded our expectations by creating an eclectic my bouquet with the varying shades and textures! I sent her ribbon from The Lesser Bear and it paired beautifully with the bouquet she had created. My bridesmaids had smaller versions of my bouquet with a simple ribbon wrap and Richard and his groomsmen wore boutonnieres with white florals and greenery. 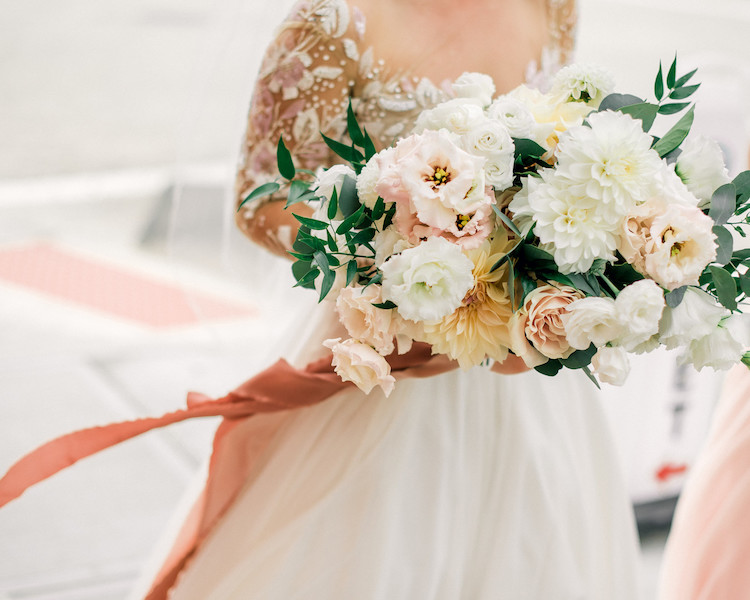 I wore the Remmington wedding dress by Hayley Paige which was a long sleeved, A-line gown with a floral beaded bodice,  low open back and a layered English net skirt. It was perfectly complimented by my bridesmaid’s dresses! I wore my hair in a loose dutch braid with loose pieces on the sides. My makeup was a soft look of with matte pinks, browns and a nudes

Richard and I wanted a way to honor the loss of significant individuals during our ceremony. In order to do that, we deemed one chair in the front row, adorned with a sweeping garland, as a remembrance chair. At the beginning of our ceremony, Richard and his six groomsmen held a single white rose to represent each person we have lost over the years. They each went up one by one to place their rose on the chair in honor of a loved one. This was really important to us since two of the people who could not be at our wedding was my dad and Richard’s stepdad. 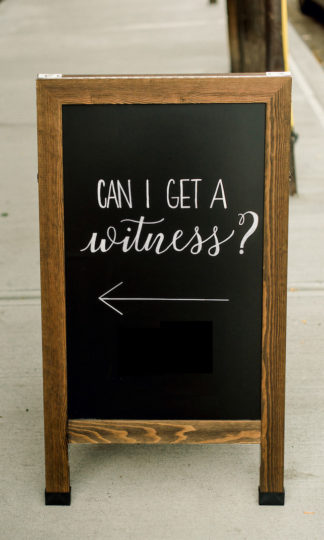 We are avid DIYers, so we personalized our wedding by creating a cedar triangle arch for the ceremony. We also made all of the table numbers and place card holders for the head table. It was a blast to be able to make so many things and seeing it all come together the day of was so fulfilling.

We decided to keep the ceremony décor simple to highlight the brick wall backdrop and the intricate woodwork within the space. We used two large wooden barrels that had organic foliage arrangements on top to delineate the start of the aisle and greenery clippings on either side of the aisle that led to our 9ft triangle arch adorned with florals. 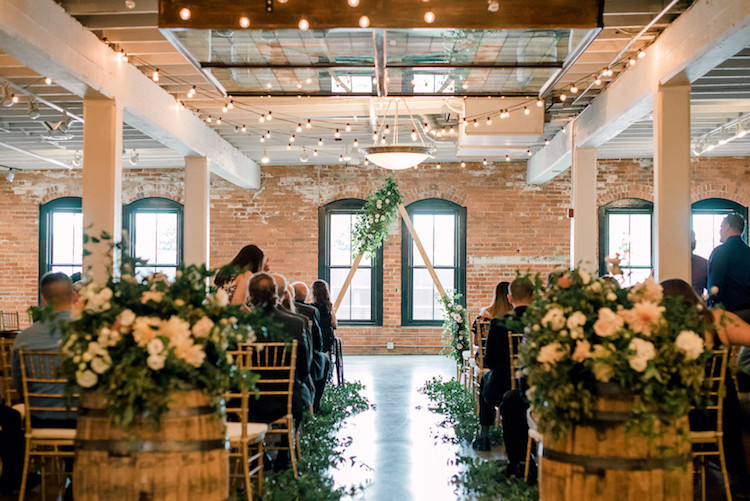 Since our wedding was at a brewery, our florist, Heather had the idea of using hops in the arrangements that were on the barrels and attached to our arch and we absolutely loved the idea! It made the arrangements so unique and as an added bonus, they gave the space a great aroma!

Richard, along with his groomsmen, looked classic rocking black suits from the Black by Vera Wang line. The groomsmen all wore black ties while Richard wore a burgundy floral tie from ZUZU to stand out. Richard was the only one who wore a pocket square since one of the guys couldn’t find his the morning of the wedding which was no big deal in the end because it worked out just fine! 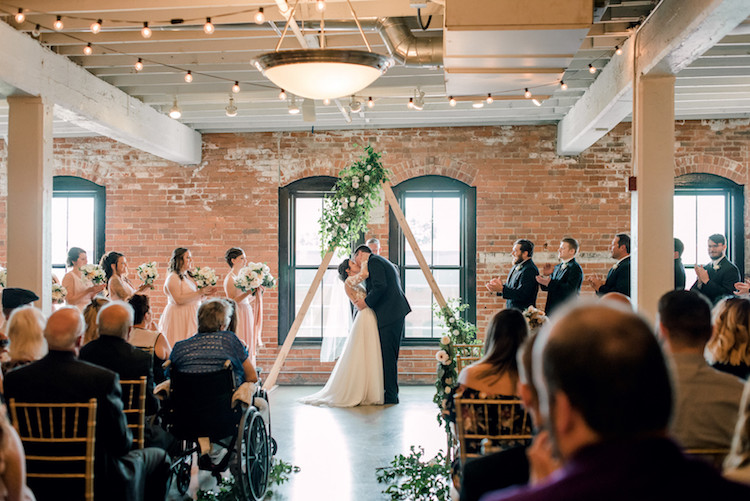 The most important thing to us was to have someone that we know and love marry us. Richard’s uncle took on the task of getting ordained just for our wedding and he did a phenomenal job! We could not have imagined anyone else marrying us. It was so special and we will be forever grateful to have that memory from our wedding.

Richard and I wrote our own vows and I am so happy that we decided to do that. It made the ceremony even  more special and it’s something we will get to reflect on years from now. 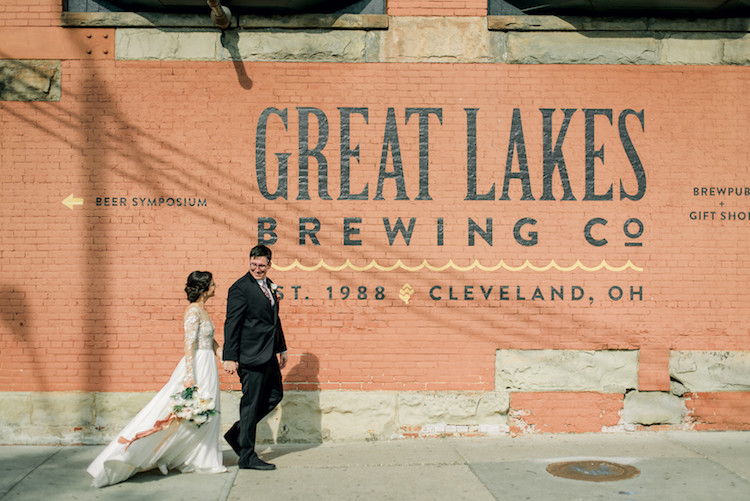 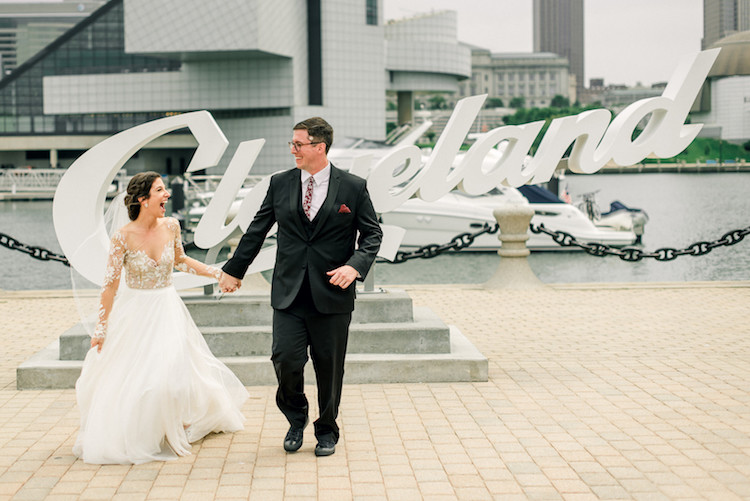 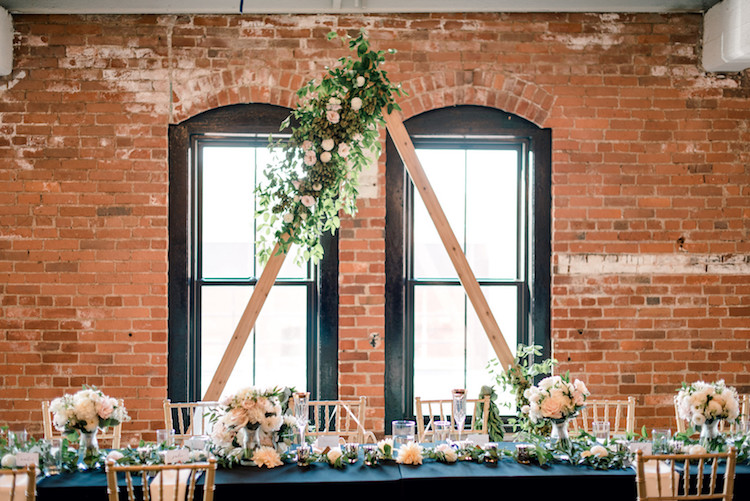 At our mid-century modern wedding reception we had a cluster of pillar candles in glass cylinder vases along with tea-lights in gold mercury votive holders on a bed of greenery clippings on each guest table. The head table had the same décor, but we repurposed the bride and bridesmaid bouquets down the length of the table as well as loose florals. 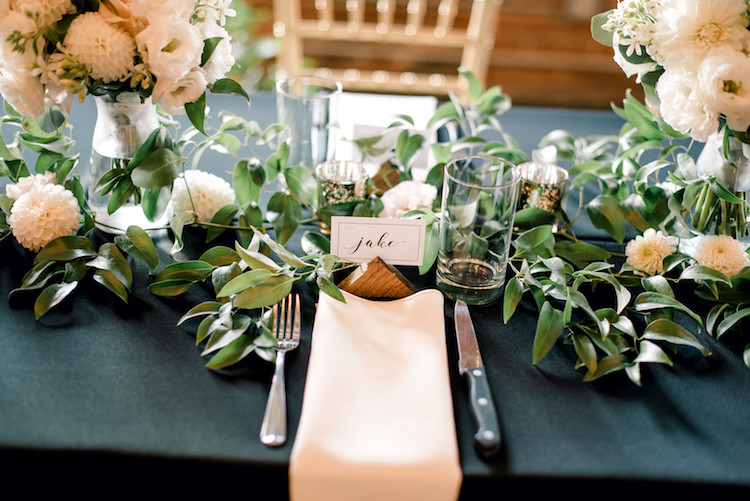 Our bridal party each had a small wood triangle place card holder with their name at their seat which were a challenge to make due to their size, but I loved the way they turned out.

We continued the use of gold at our mid-century modern wedding reception by having gold chiavari chairs delivered to our venue which I think made everything come together beautifully. 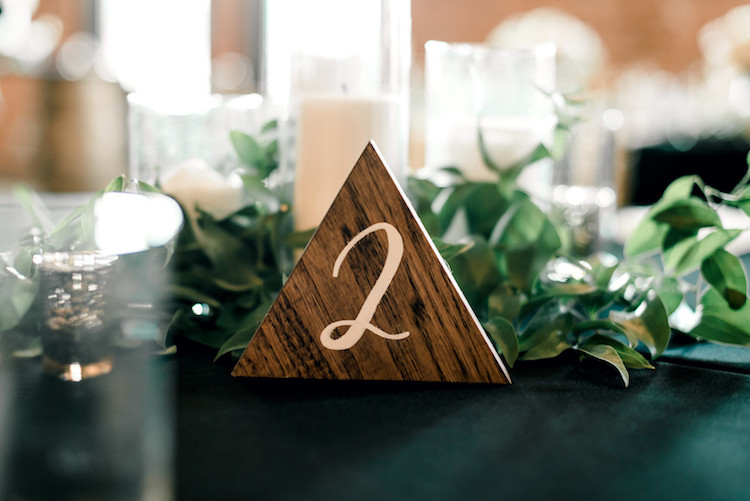 For the table numbers, we made wood triangles and hand lettered the numbers onto them which tied into our triangle arch that was displayed behind the head table for the reception. 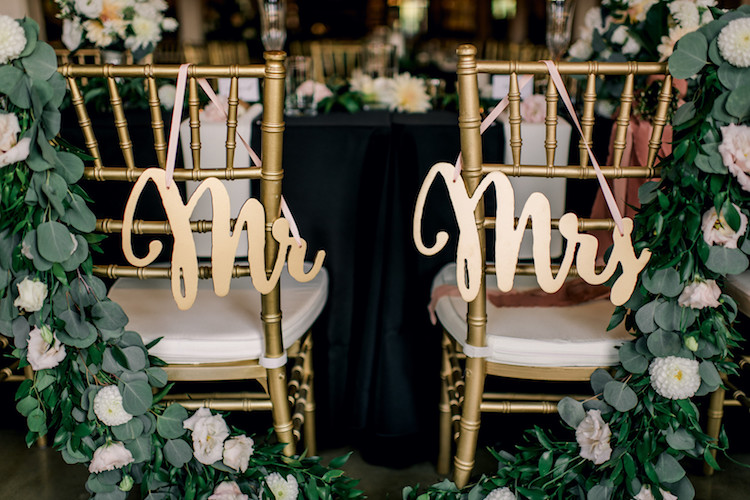 If I could go back and do one thing differently, it would be to start timeline planning a lot sooner than we did. We had booked a limo pretty far in advance that had a 5-hour minimum on Saturdays and we ended up only needing them for 3 hours since our ceremony and reception was in the same place! Had we planned better, we could have saved a few hundred dollars.