Marelise and Ryan – A Fairy Tale Wedding from Beginning to End 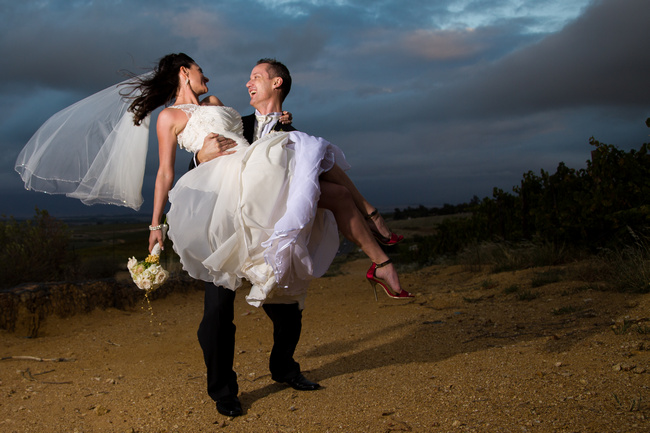 Always dreamt of having a fairy tale wedding? But, not quite sure of how to pull it off? Well, we let you in on how to create your very own fairy tale-themed wedding. Taking a leaf out of real-life bride Marelise Gilbert’s Fairy Tale Book, read on and feast your eyes while learning how this creative bride did it.

Prince asks Princess to Marry Him: A Fairy Tale Proposal

From their engagement to their wedding, Marelise and her now husband, Ryan from Cape Town, had their very own real fairy tale. Recreating the moment where they first met, Ryan, the romantic, proposed on one knee at Rhodes Memorial and cleverly planned that the moment would be remembered forever by asking their friend, Josephine van Zyl from Josie Photography, to capture the proposal with her camera. Below, she captures their proposal step by step!

Later, they had their simply gorgeous official engagement photographs taken in and around the beautiful setting of Kalk Bay by their photographer, Justin de Reuck. 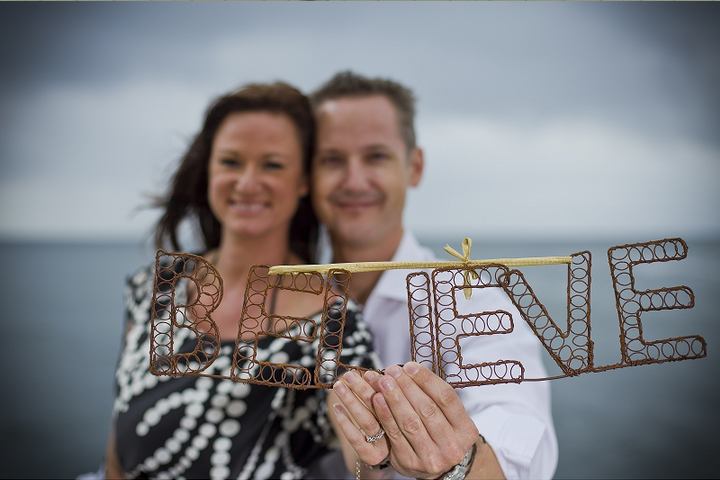 How to Create a Fairy Tale Themed Wedding of Your Own

Marelise had so many cute and clever ideas which we just love! Let’s take a look at just how she went about creating her fairy tale wedding, and how you can achieve the same effect.

Sending out fairy tale themed Save the Dates: Marelise and Ryan’s romantically theatrical Save the Dates were created in the style of a ‘Twilight’ fairy tale video clip, which was sent to guests to announce the start of their fairy tale.

Wedding Invitations: Their to die for wedding invitations were created in the form of an unfolding book to give their guests the experience that they were ‘unfolding a fairy tale booklet’. Their invitation was then enclosed with an envelope that stated: “A love story that should be told…it all unfolds on 14 April 2012”, which gave guests insight into how Marelise and Ryan had first met. So sweet!

Create Your Very Own Kingdom

The Venue: Their wedding ceremony was held at amazing Karibu (Swahili for “Be Welcome) in Riebeek Wes, which is nestled in The Riebeek Valley creating a playful yet romantic atmosphere that was just perfect for capturing the colourful and rustic look of the surroundings. Marelise says it was love at first sight: “When we went to view the ceremony venue, Karibu, we instantly knew this was the place for us.” According to Marelise, there were sure signs that Karibu was their “Special Place” and that they were meant to get married there. 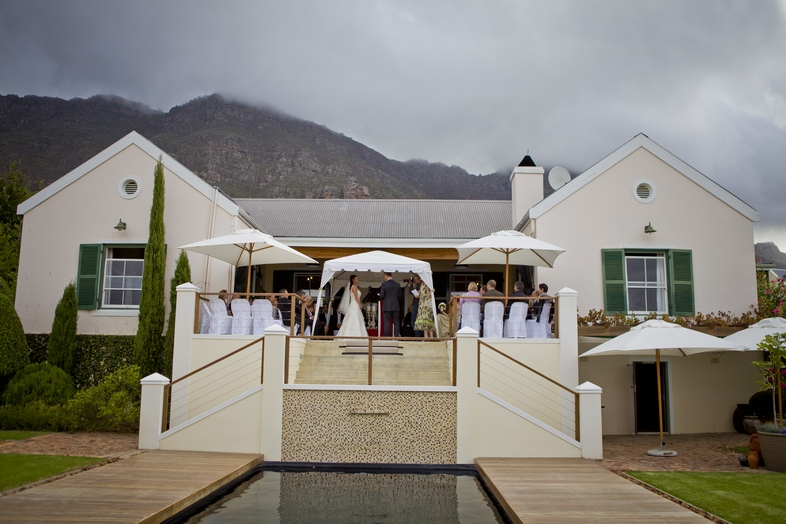 With the ceremony venue displaying the word ‘believe’ on the wall and two lion statues overlooking the pool area that are reminiscent of the lions from Rhodes Memorial where they first met, Marelise  was adamant that one needs to “BELIEVE in the signs you see and LISTEN to your heart!” This was something that they wanted to bring across in their wedding.

The couple chose to have a Unity Ceremony. Inspired to create something special to reflect the joining of the couple’s two families and special fur kids – also known as dogs, Marelise and Ryan created a heart puzzle. Marelise explains that “We knew that life had brought the two of us together, like pieces of a far bigger puzzle.  And so, the heart puzzle was born.” The unity ceremony involved Marelise and Ryan each placing a piece of the puzzle into the frame. We just love this idea!

Order of Service: To reflect how greatly the couple value their future journey together, their Order of Service was in the form of a Passport. Take a peek at the gorgeous booklets: 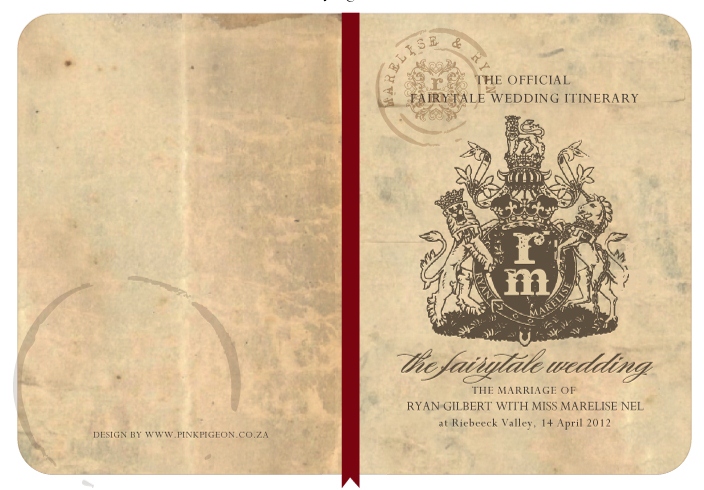 Vows: They each wrote their own vows and read it to each other as a surprise on the day. Personalised vows really made it so special. They then pasted the actual readings in their guest book so now they have a copy of it forever.

Fairy Tale Confetti: Another really clever idea that the bride came up with was to make their confetti cones from pages from a fairy tale book, which Marelise folded into the shape of cones. Thereafter, she wrapped some nice ribbon around it and filled it with flower petals, which worked out beautifully! Marelise says that it was a project her bridesmaids and her new step daughter enjoyed doing as a bonding experience. 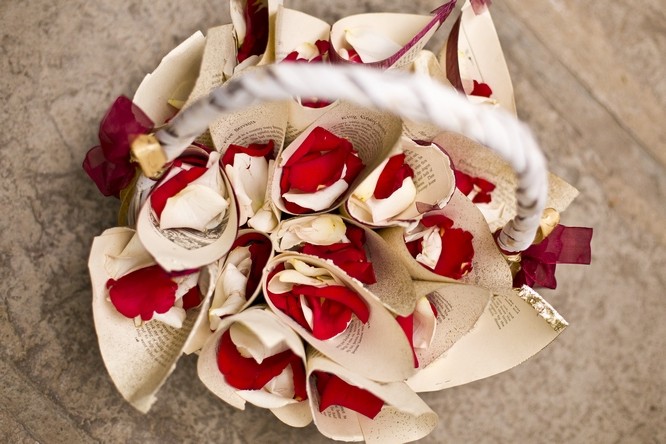 Marelise and Ryan’s wedding reception was held at Cafe Felix in  Riebeek Kasteel, a perfect venue for beautiful pictures! 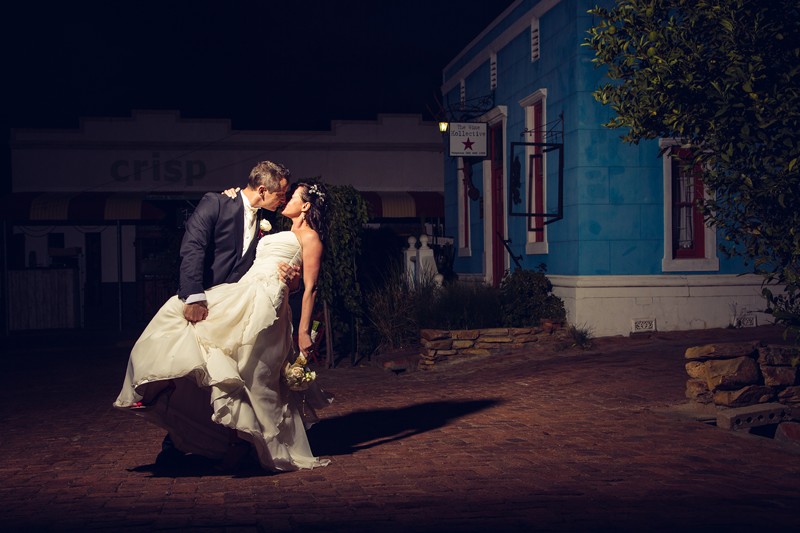 Theme: The fairy tale-inspired theme with a hint of French Romance was evident in all of the small touches of their wedding decor. As a result, their decor was made up of all things decadent – string pearls, lace, books, antique-looking golden candelabras and candleholders each with round or pillar candles, roses, and hearts, and other vintage-inspired ceramics like old gold urns and petite gold oval bowls with smaller candles. 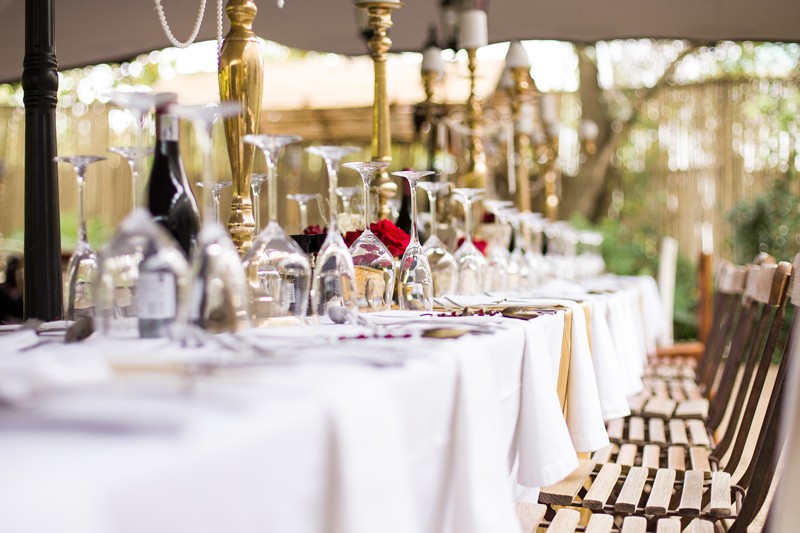 Flowers: The couple chose antique-styled colour roses such as the Coffee rose that is champagne in colour and pink-reddish and green hydrangeas were structured loose or more compact depending on the container used. 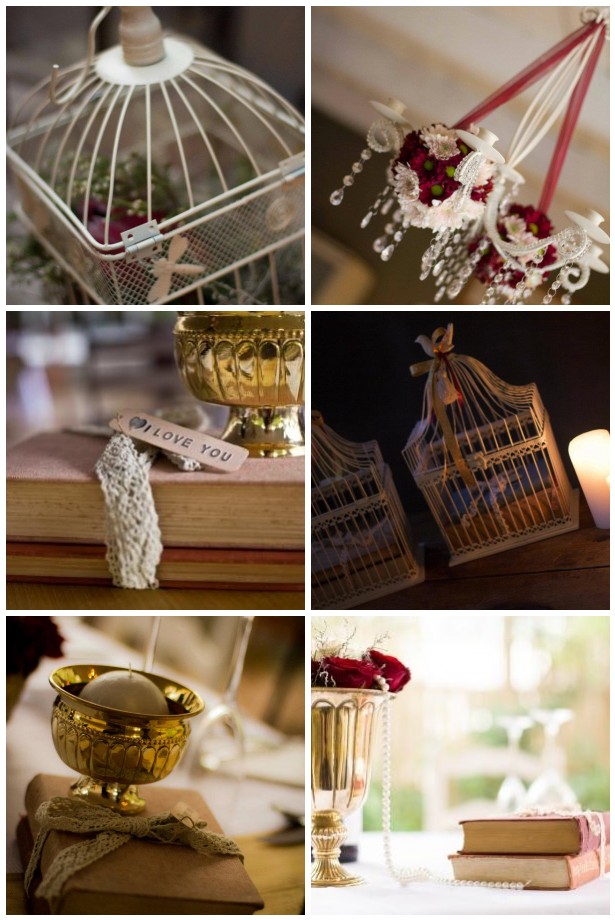 Other simply stunning fairy tale touches were found outside the venue with signs saying “Marelise and Ryan, Happily ever after starts here” guiding guests in the direction of the area where the ceremony took place.  The outdoor lamp posts were decorated to resemble tortured willows with small flowers and a few hearts and fairy lights were draped in the branches of the trees above. Sounds like something straight from… a fairy tale!

Wedding Guest Book: To give the impression of a blackboard, their love story was shared at the reception in this really cute way. Snippets of how the couple first started talking after they met online is shown alongside a timeline of events. Guests were asked to add a few words or well wishes of their own, or to draw a picture in their guest book. 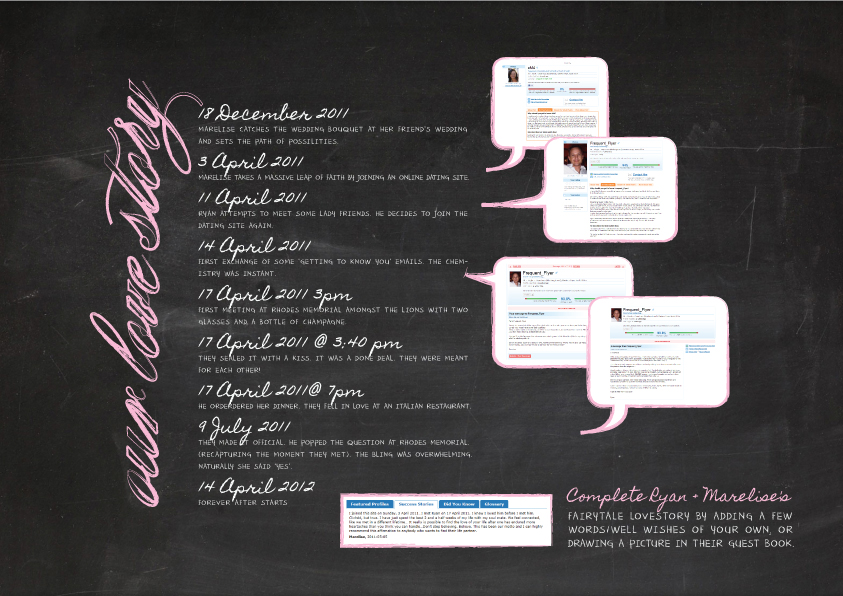 Guest Seating Chart: Pinned onto the entrance door of their reception venue, the guest seating chart for the 80 guests was completed with ribbons and guest names attached to it. 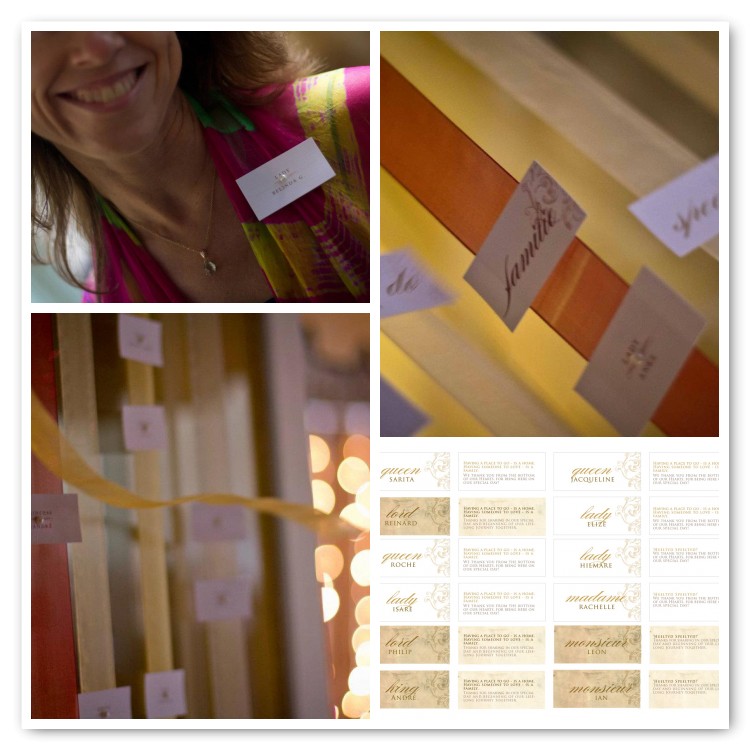 True to the fairy tale-inspired theme, the guests all played their part in Marelise and Ryan’s Wedding fairy tale with each guest being called a king, queen, prince, princess, duke, dutchess, lady or knight for the evening. Marelise learned that her guests also found it useful as nametags in order for guests to get to know one another – genius!

Table Names: Each table name represented a word that was personal to them and that has defined their journey together: “Believe” , which is the couple’s life motto, was used for the main table; “Familie” (Marelise says that since she’s Afrikaans they had to throw in a few Afrikaans words!), “Love”, “Heeltyd Speeltyd” (just a favourite saying picked up from their travels), “Friends”, ‘I do”, and “Forever”. 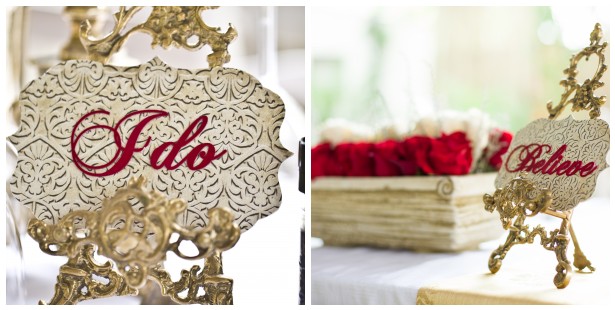 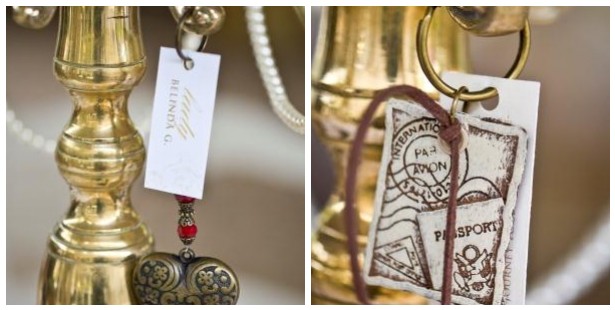 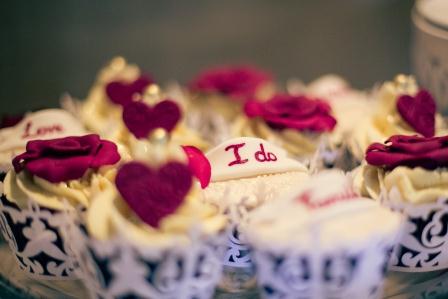 Wedding Cupcakes: Baked in black liners, their red velvet  and dark chocolate cupcakes  were piped with natural buttercream and ‘rose’ piping and were each embossed with the words of the table names: Believe, I do, Speel, Familie, Love, Verlief,  and Forever.

Drinks Station: Their Drinks Station was set up during the wedding ceremony in the cellar, where they had a lovely twist on the words Eat, Drink and Be Merry, which got a little chuckle from the guests. They had framed signs that said: “Greet, Drink, and Be Married!”

Wedding Menus: Their wedding reception menus were presented in a gilded frame and displayed for all the guests to feast their eyes. 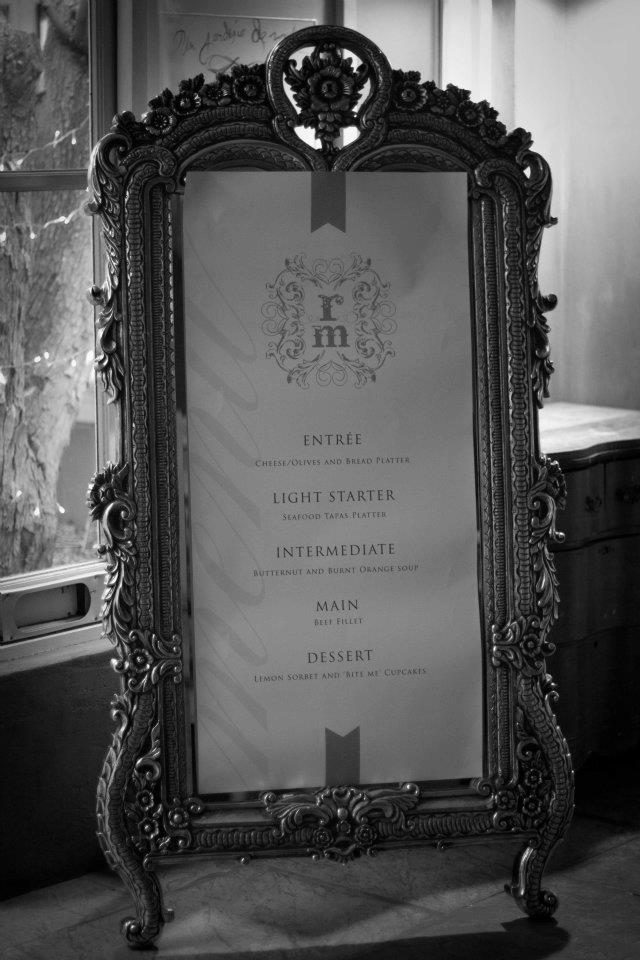 The Dance: They started their dance with Michael Jackson’s ‘The way you make me feel’. Ryan removed Marelise’s garter during the dance and threw it at one of the single guys (there were only 2 of them at the wedding!). As their journey and wedding were filled with ‘words’, they then danced to their ‘feel good’ song ‘More than Words’ by Westlife. 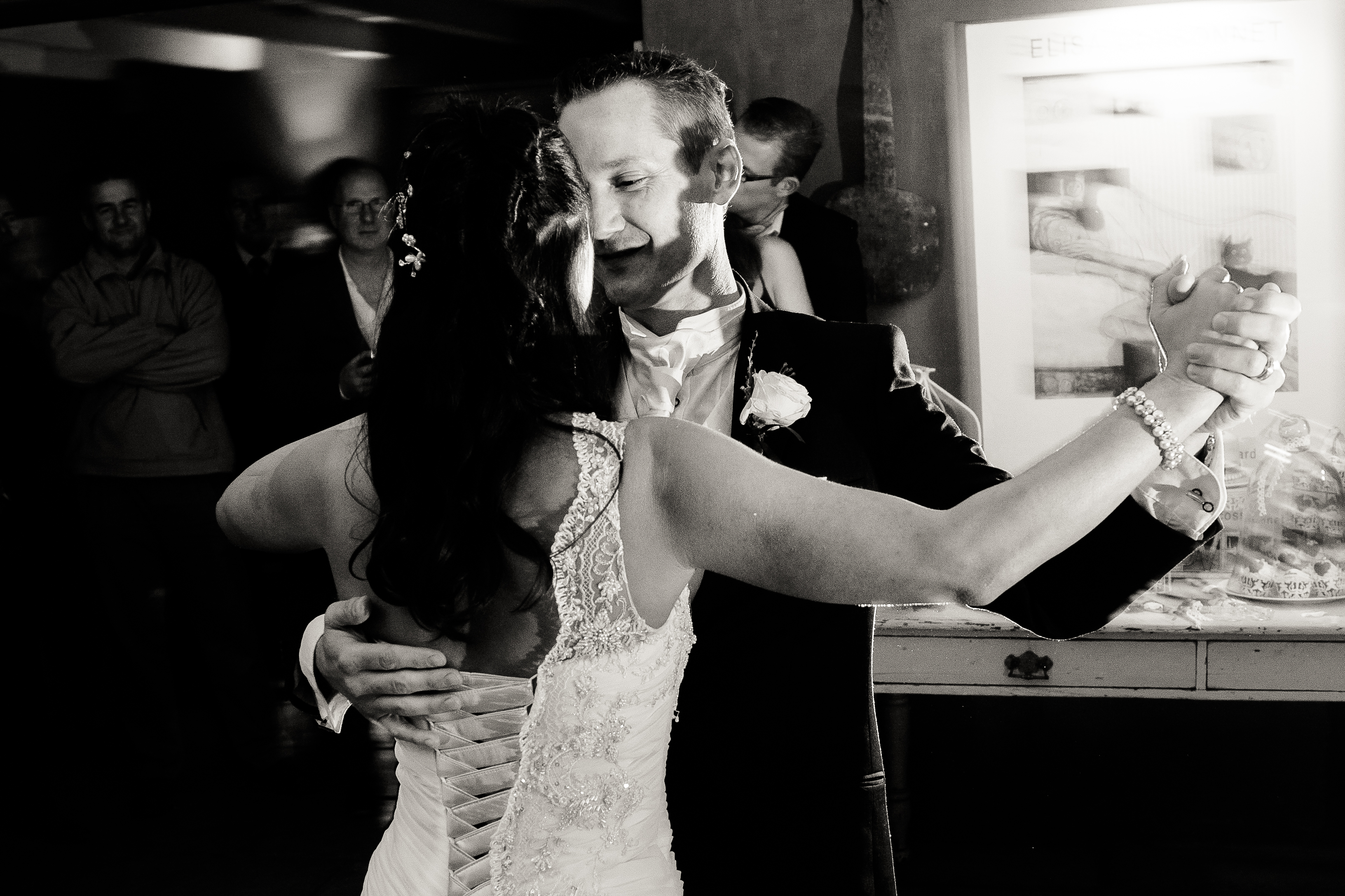 We absolutely love all the romance, tenderness and thought that Marelise put into every aspect of her fairy tale wedding. The ceremony and reception were indeed fit for a King and Queen, and we wish them many years of love and happiness as groom whisks bride off into the sunset!

Remember, if you’d like your wedding to be considered for a real bride feature on Confetti Daydreams next, you can submit your photographs and pretty projects here. For more real inspiration, take a look at our bright and fun {Real Bride Feature} A Country Chic Yellow & Green Wedding Theme. Yay!