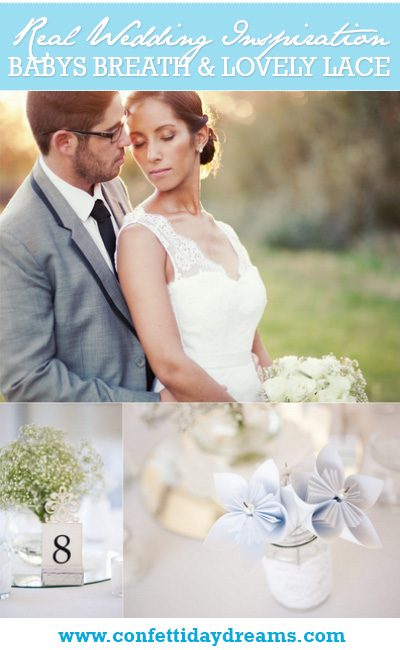 Jonathan and Taryn’s beautiful wedding was held in the romantic Franschhoek wine valley just outside of Cape Town, South Africa. The couple shared the planning and celebrating of their wedding day with their loved ones, having everyone lending a hand to create their stunning wedding decor and stationery.

Having always dreamt of having an all white wedding, Taryn decided to do just that by adding touches of ivory and keeping things simple. Their classic wedding was inspired by lace, pearls and the ever so delicate Baby’s Breath, which is such as versatile wedding flower as seen here in our 17 DIY Baby’s Breath, Burlap & Lace Wedding Ideas. They also used plenty of paper in all of sorts of creative ways! While Taryn dishes every detail of how their lovely day came together, fab South African photographer, Moira West shares her magical photo records of their special day. 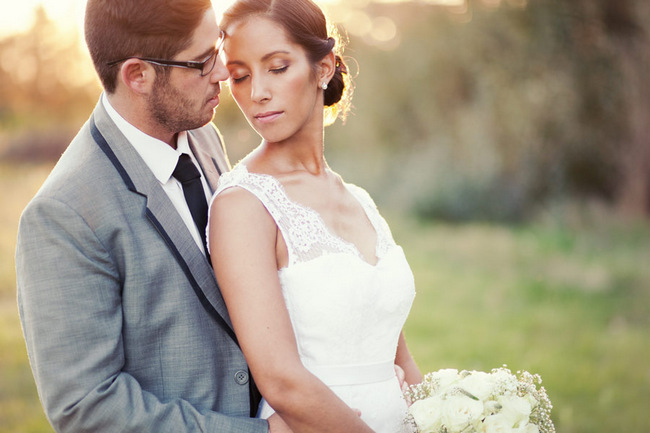 Baby’s Breath and Lace Bridal Style: Taryn pulled off a timeless and classic bridal look. She looked exquisite wearing a white lace wedding dress, which she had made by Leonie Jardim. She desigend her dress by combining a few key elements of dresses that she liked into her dream gown. “My favourite part was the back of my dress,” says Taryn. 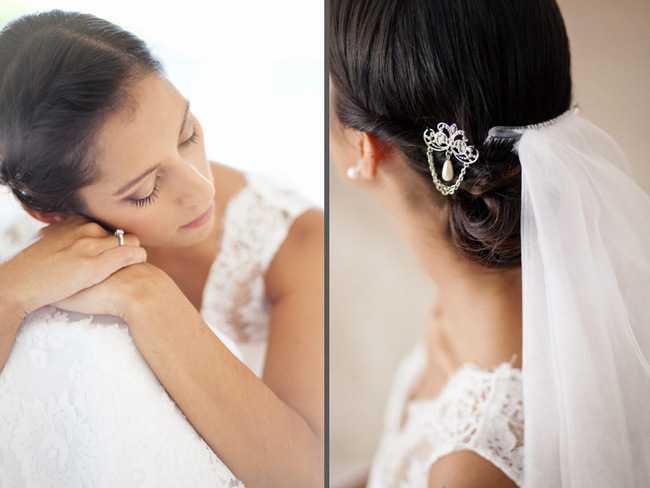 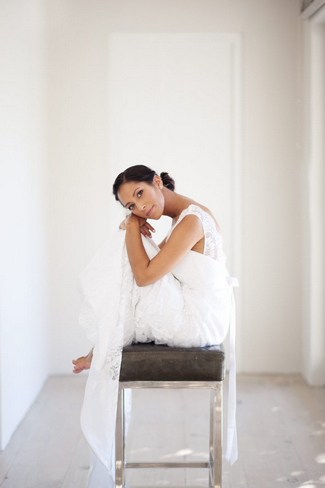 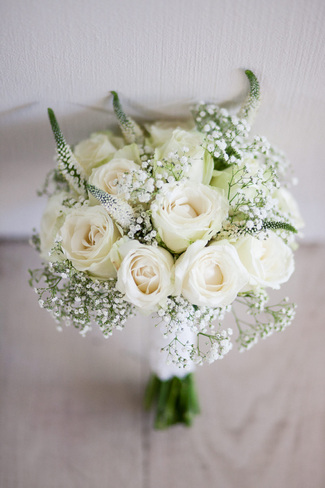 Baby’s Breath and Lace Wedding Bouquets: Fennec from Fox & Co. took care of all the flowers. Taryn decided to go with Baby’s Breath bouquets for her bridesmaids as she liked the softness and thought it went well with her theme. “I absolutely loved what Fennec did with my bouquet,” says Taryn. 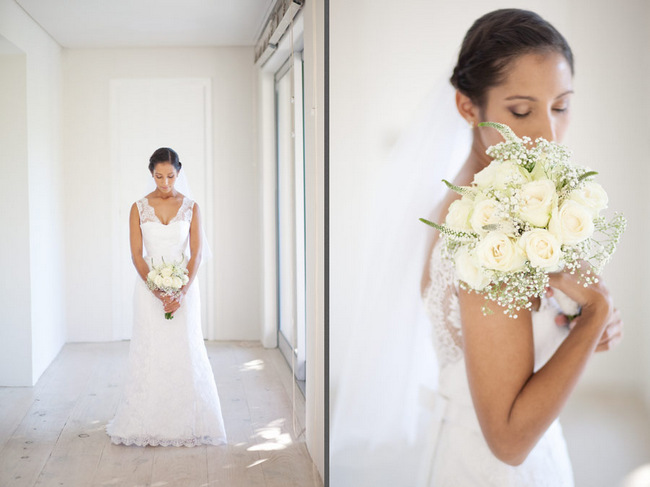 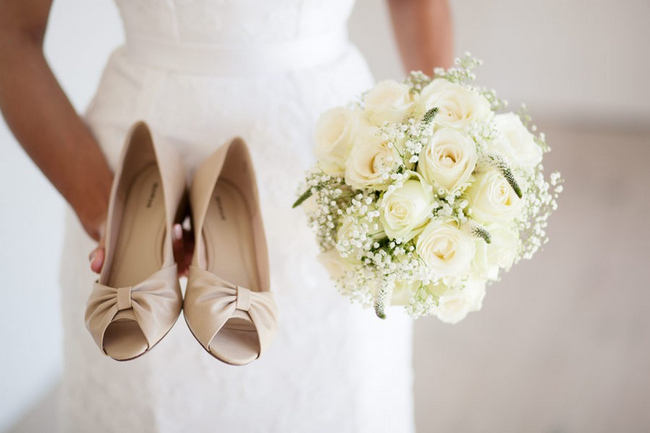 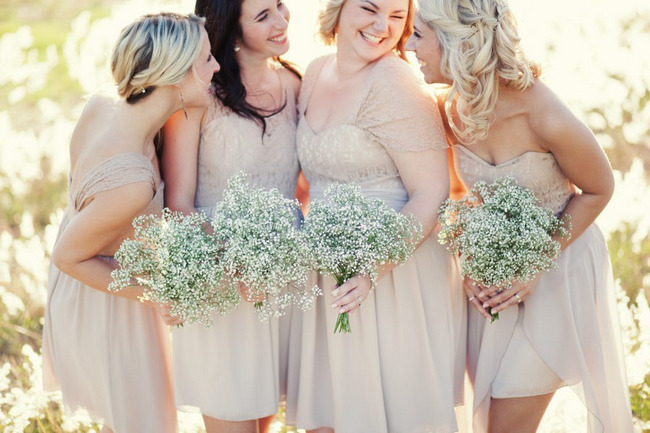 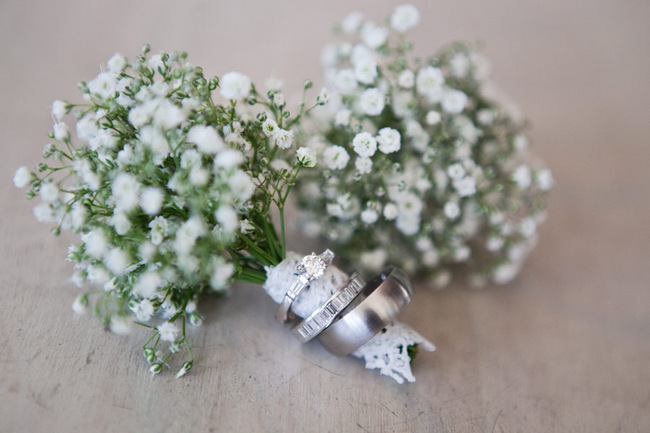 Gift for the Groom: On the morning of their wedding, Taryn had her dad deliver a gift to Jonathan, which contained a photo of a boudoir shoot that she did with a note saying how she couldn’t wait to see him, a picture of his late dad to “put in his right pocket closest to his heart” and mints so that he didn’t chew gum at the altar. 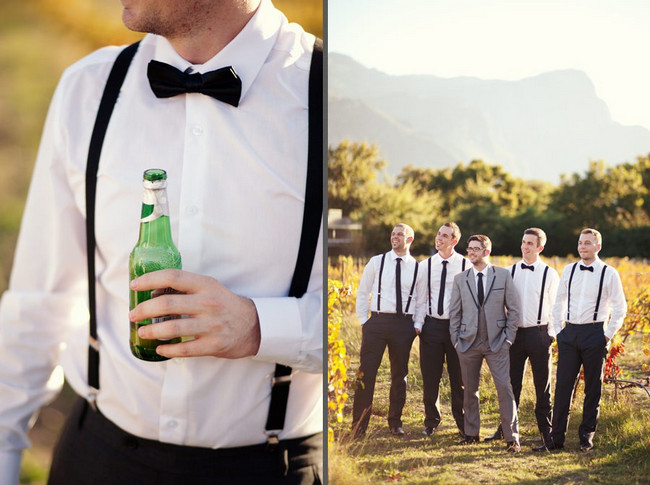 Taryn chose to walk down the aisle to Christina Perri’s, A Thousand Years song. “I will never forget Jonathan’s face as I saw him standing at the end of the aisle. That was one of the most special moments of our big day,” says Taryn. 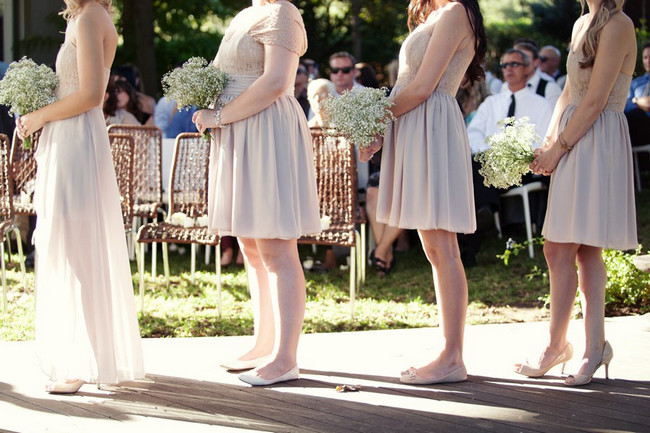 Taryn shares the story about how they met and fell in love: Jonathan and I met through mutual friends and became close friends instantly. After a few months of friendship we realised that the feelings we had for each other were more than that. He then asked me out on an official date. The amazing thing about us was that we could chat for hours and because of that we got to know each other very well fast. As cliché as it sounds, it was on our first date that I knew he was the one for me. 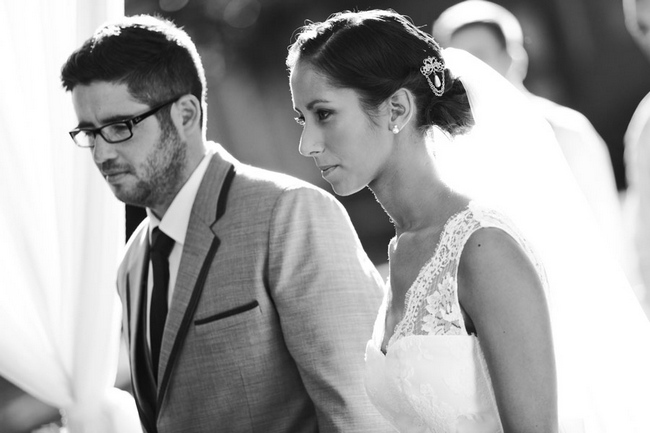 The Tale Of Their Proposal

Taryn lets us in on Jonathan’s proposal: After buying a house together, we planned to first complete a few renovations before moving in. We wanted to move in before Christmas as we want to spend this first Christmas in our home together. However, the renovations took alot longer than expected. On Christmas Eve, after having dinner, we were on our way to my parent’s house, hoping to arrive before midnight as it is tradition in our family to open gifts at 12am. Then Jonathan made an excuse to stop by his mom’s house. After being in the house for a while, he hopped back into the car and said that we urgently needed to stop at our renovated house on the way as his step dad, who was doing the renovation, had left his cellphone there and it was not safe as it was a open shell at that stage. I was even more anxious as we were definitely going to be late for present opening. We stopped outside our house and he ran in quickly while I waited in the car. Still having no clue what he was up to. He then called me to come have a look inside the house because there was “something wrong with the ceiling” as he said. Before I could object, he turned around and ran into the house again. I then proceeded to get out of the car and walk into the house only to find that he had put fairy lights everywhere and a little Christmas Tree in the corner of what would be our dining room. I was obviously so surprised but still had no idea that he was about to propose. He said to me that he was sorry that the house wasn’t complete before Christmas but this was the best he could do in the meantime so that we could still have “our own Christmas” in our new home. I noticed a present under the tree and he said I should open it. As I opened the box, there was a limited edition hard cover version of The Notebook by Nicholas Sparks, which I had been dying to read as it is my favourite movie. He then told me there was more in the box and suggested I take another look. And there it was, a blue velvet box. I opened it and began to cry. Looked to my right and there he was on one knee and asked me to be his wife. I pulled him up off the floor and hugged him tight and said YES. 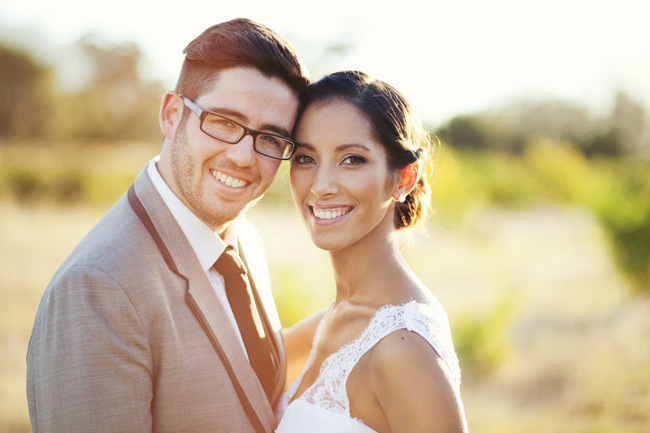 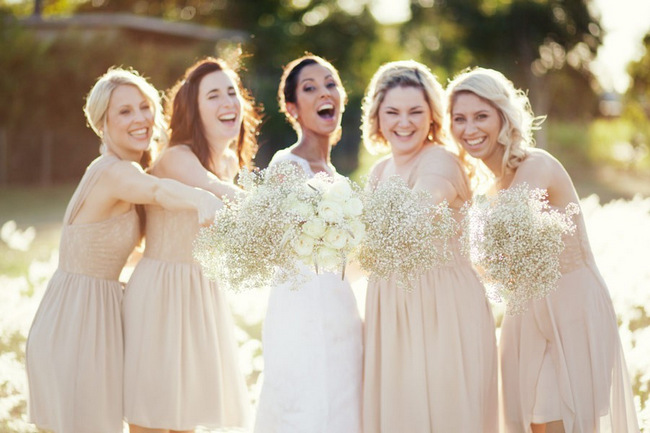 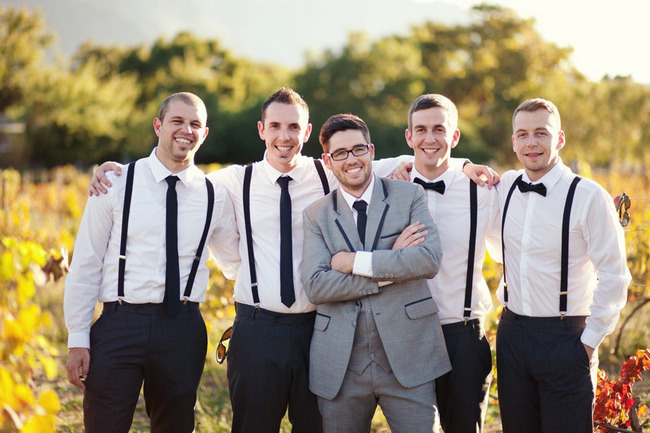 Their wedding was held at The Conservatory in Franschhoek, one of the most amazing wedding venues feature in our list of 20 Garden & Outdoor Wedding Venues, Cape Town. 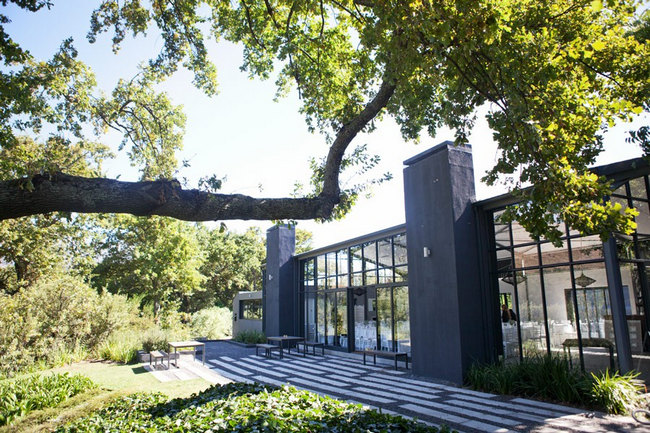 Baby’s Breath and Lace Wedding Décor: Taryn’s friend Kerrith from Boutique Event Styling, helped her to plan her South African wedding. Everyone was involved, lending a hand to take care of all the decor for the tables. 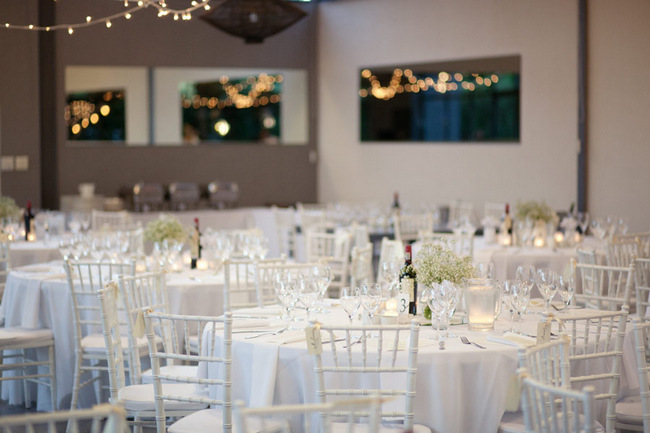 DIY Table Seating chart: For the seating chart, Taryn covered a large pin board with white lace. She then took empty frames and placed the different table numbers with the names of the guests in each frame. She used pins to keep the frames in place. 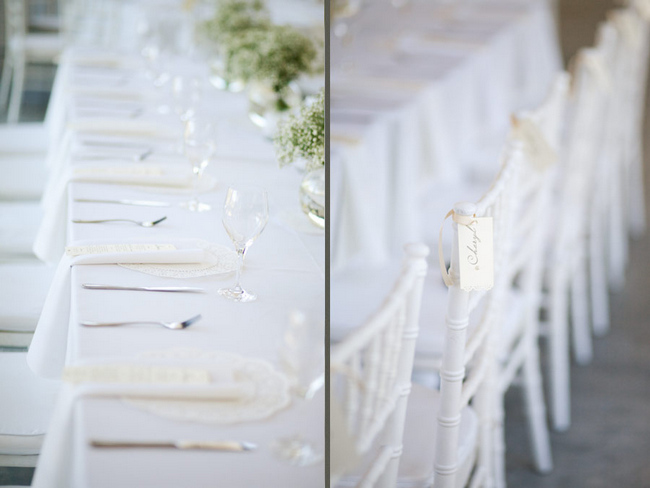 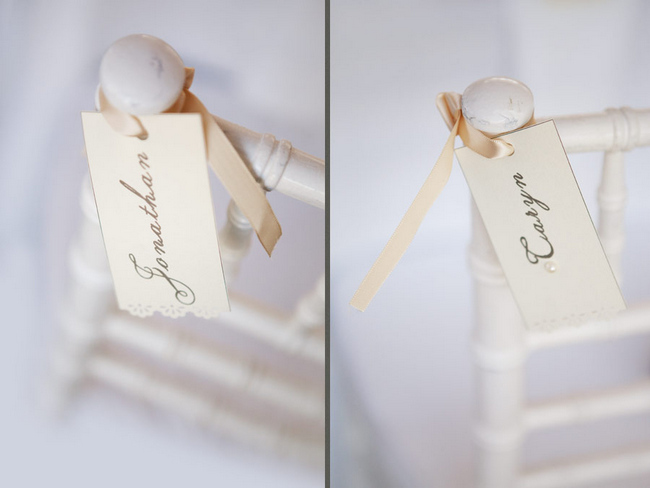 DIY Wedding Placement Cards: The placement cards were punched with a lace pattern punch and a pretty pearl sticker were added to each card, before it was tired to the guests’ chairs. 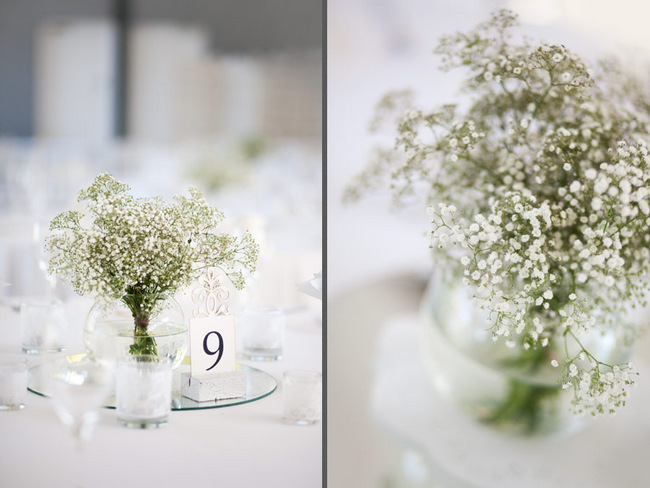 Baby’s Breath Wedding Flowers: Baby’s breath was her flower of choice and she couldn’t have been happier with the overall soft effect that it added to their wedding.

DIY Lace Wedding Decor Project: They made plenty of origami flowers, which was a very cost-effective way of decorating the tables. With the help of family members, the couple folded and glued all the flowers. “It was a great fun and an awesome way to spend some time together and got me to relax and not think about wedding planning,” explains Taryn. They used an origami tutorial, lots of paper, glue and patience!  For the flower stems, they used floral wire and added a pearl bead at the top. To keep the wire in place, Prestik was useful to keep things together at the base of the flower around the wire. 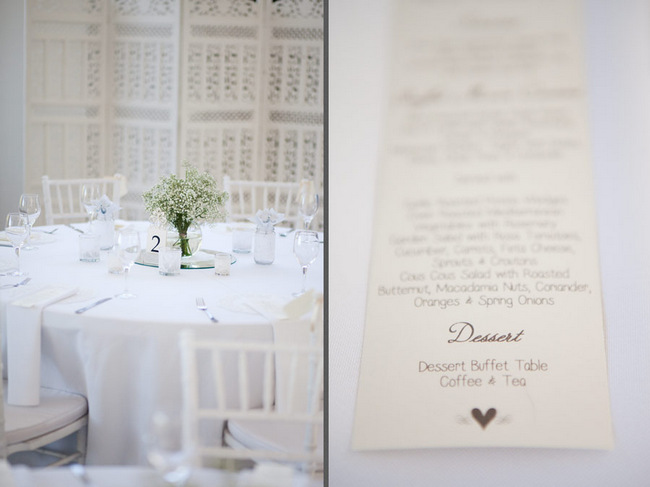 DIY Wedding Menus: Taryn kept everything simple by designing the menus. After printing the menus, a small pearl sticker was placed on each menu to ensure that they matched their wedding theme. 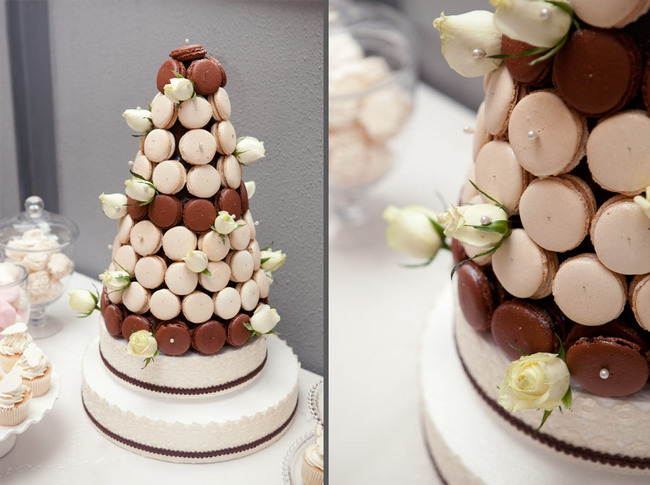 Wedding Favours: For wedding favours, they had a dessert and candy table filled with Chocolate Mousse, mini Lemon Meringues, cupcakes and  a macaroon tower, which was a gift from one of our guests. 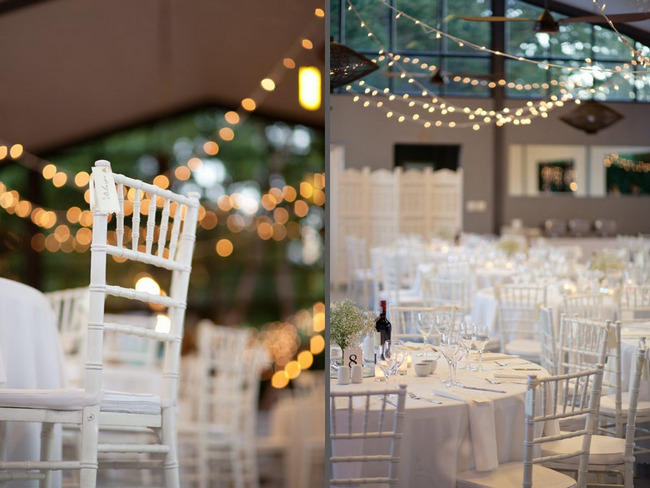 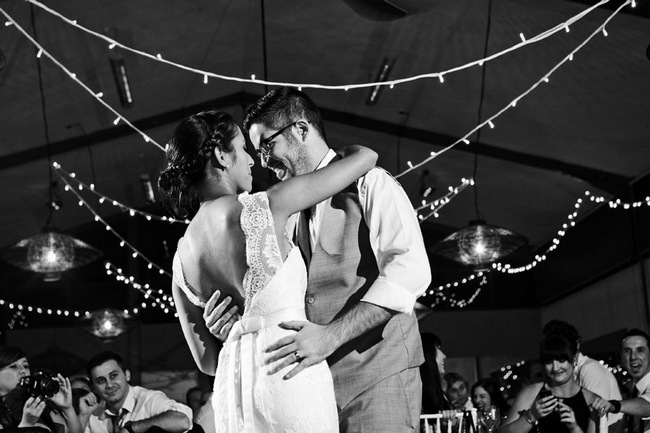 We love the idea of using paper and moulding, cutting and imagining it into different shapes and forms! Showcasing just how paper can be used to add a unique and affordable element to your wedding, we’ve featured a this paper-inspired Oh Great Gatsby! Wedding Shoot in Blue & Gold, which includes tutorials such as this  DIY Paper Feather Wedding Lamps {Tutorial} and this DIY Paper Mobile Wedding Backdrop {Tutorial}.